The ASUG BI Community has a great slate of BI and Analytics sessions ready for you to add to your ASUG Annual Conference/Sapphire now agenda! Our intrepid Community Facilitator, Tammy Powlas, has put together a great addition to your information arsenal. Remember, these sessions have been picked by the ASUG BI Volunteer team to try and cover the questions that attendees have been asking about.

A List of all the sessions selected by the ASUG BI Community, sorted by session number so you can easily search and add to your online agenda:

And a “who’s who” of the Volunteers…please feel free to stop any of us and ask questions. We are your voice to SAP and are always looking for feedback and discussion! 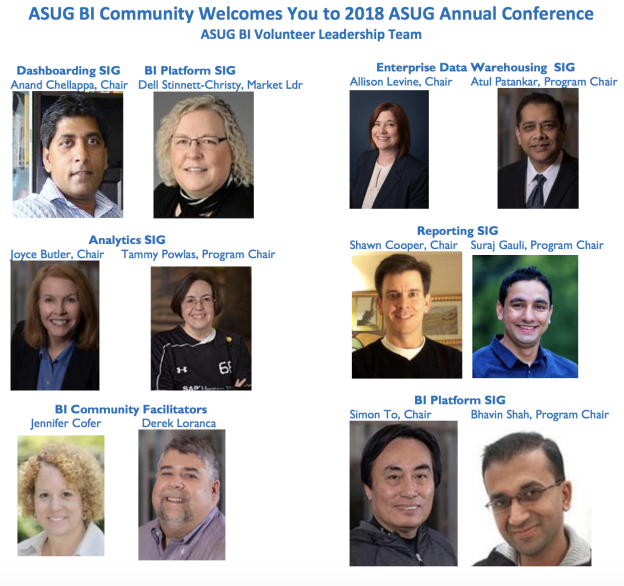 I’d be remiss if I didn’t plug for my personal session, too!! Fellow ASUG Volunteer and SAP Mentor Jamie Oswald and I will be hosting a panel discussion on a very serious topic. Come to hopefully be entertained AND educated!

If you like the above content and want to chat with other like minded BI folks, make sure to add the ASUG BI Community Roundtable to your agenda:

BI Community Meet and Greet: Thursday, June 7 from 12:30pm to 1:30pm at the ASUG Hub/Roundtable Section.

As attendees of the 2018 ASUG Annual Conference, you are invited to network with the ASUG business intelligence (BI) volunteers and other SAP BI community members. Spend an hour networking and forging new relationships within your community. Take advantage of this timely opportunity to learn more about ASUG and to find out how to leverage the user group along your journey utilizing SAP solutions and services.

As always, feel free to drop me a note on Twitter or a comment here. I look forward to seeing everyone in Orlando!

SAP Inside Track Newtown Square is back for 2018 and happening during Philly Tech Week! The ‘East Coast’ SAP Mentors and Alumni are excited to bring Inside Track back to Newtown Square and are looking for speakers and attendees. If you have a story that you’d like to share, then we’d like for you to submit it right here. You like your technical content enterprise flavored, with a large side of community? Then you need to register for SITNSQ right here.

As speakers are selected, we’ll be updating our SAP Community Network Wiki with the latest agenda. Keep an eye out as we announce a keynote speaker and try to tie our excitement around enterprise tech with the larger Philadelphia technology scene during Philly Tech Week 2018.

I think it’s important enough to mention twice: Call for Speakers is LIVE! Events like Inside Track are only as successful as the content they provide. I’m sure we’re going to have a great slate of awesome sessions, but I would love to have a session or two that came directly from the woodwork of the vast SAP community out there. Remember: come for the excellent content, leave with a new sense of community and feeling that you’re not alone out there!

We’re one month+ of my last Chromebook blog and I’ve had a chance to use it in a variety of different situations, including:

My verdict? Not bad! But I wouldn’t give up a full-blown laptop to use the C720 as my ‘daily driver’. For comparison purposes, here’s the computer the Chromebook was up against- a Dell Inspiron 11z (1121). The specs are:

The C720’s keyboard is mushy and has a lot of play. I just don’t find myself using it as efficiently as the Dell’s keyboard. Even my work laptop (HP Elitebook 3650p) has a better keyboard.

The C720’s trackpad is just OK. It’s responsive, but the clicks just don’t feel ‘natural’. The main issue is that my typing style/hand placement are forever moving the cursor to the middle of a sentence I’ve already written. That is quite frustrating.

The C720 has a 11.6″ matte screen with the same 1366×768 resolution as the Dell 11z. Textlooks much brighter and crisper on the the Dell’s WLCD glossy panel than on the C720. Heck, the non-retina screen on my old iPad 2 looks nicer than the C720’s screen! The C720 just looks washed out and at times makes me think that I should have splurged on the HP 11 Chromebook with its nicer screen. But the performance and price difference of the C720 won that battle.

I’ve only had a few minor instances of the C720 lagging and that’s only when I was pushing 10+ tabs on the Chromebook, with Crouton running Citrix in full screen. If I stick to just tabs in Chrome, it’s pretty darn snappy.

I’m lucky that I have the ability to choose which machine to use based on what I need to get done! If I’m going to be typing for a while and really looking at the screen, I’ll grab the Dell. If I need to do some light Citrix with some typing and need other ‘apps’, I’ll grab the iPad 2 with keyboard. If I’m just browsing the web and need to do some emails, the Chromebook would win that one out.

But right now, the Chromebook has surplanted the iPad 2 as my ‘armchair’ tool of choice for now. But I waffle between that and my iPad. More importantly, I have no hesitations recommending the Chromebook for that task, as well as for those who really just need a web browsing machine.

It’s fall and I know that I should I probably have a more seasonal picture at the header of my blog- but I don’t think so.  This particular picture does have some particular meaning.  It was taken in Ocean City, Maryland in 2008.  This was the first morning of our annual family vacation to the beach and Staci managed to wake me up to look at the sunrise- which is a small miracle in itself.

As I lay in bed watching the sunrise, I realized how lucky I was to be blessed with the life I have.  You know, the things everyone says they have- at least in public.  But I know that I have them: great family, beautiful wife, lovely daughter, brothers in arms.

So, I decided that I wanted to document these thoughts- I got up from bed, kissed my wife, grabbed the camera and took that picture.  So while, I might change the picture every so often, this will probably be my anchor image.  And I think that it just makes sense.

Well, I’ve decided to move my blog from our .Mac home page to WordPress.  This is mainly because with .Mac, the only way I could update it is via iWeb on my iMac.  Which was becoming a pain- If I wanted to just throw up quick update, it required a site change to golasalle.net and an upload of the change.  Now with WordPress, I can update from my Netbook, the internets and even my BlackBerry!!

So, make sure to bookmark this new site: blog.golasalle.net and make me an RSS feed.  I’m hoping that now I can update things a whole lot quicker!!